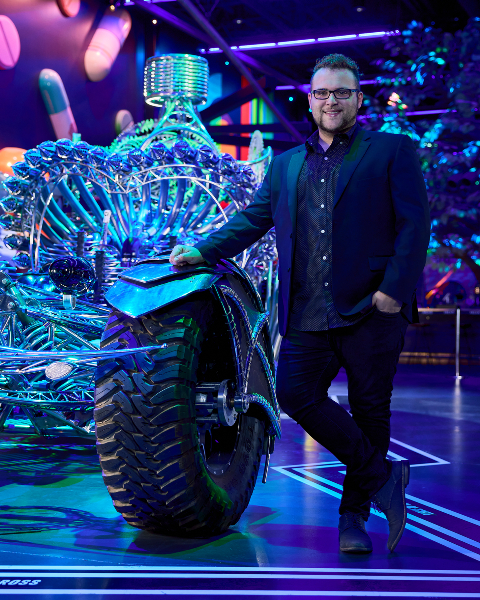 Senior Production Manager, AREA15
Jake started out in the entertainment industry as a professional magician and illusionist, performing for almost a decade. After falling in love with lighting design and special effects, he shifted career paths in 2012 and began working for Kevin & Caruso, the creators of over 20 unique production shows for Carnival Cruise Lines as well as multiple casino properties around the world. Jake spent the next 8 years touring with various production shows, magic shows and music festivals as their stage manager, lighting director and sometimes illusion designer rolled into one. Jake also spent 3 years with AV Vegas as their Lighting Director, executing over 400 private and public events throughout the Las Vegas valley. When the COVID-19 pandemic hit the entertainment industry and all planned shows and tours were cancelled, Jake migrated to AREA15 as a freelance lighting designer first designing the lighting and FX package for “The Portal”. Since then, Jake has helped design and program the over 1,200 fixtures that are installed throughout AREA15 and is always looking for a way to add more. Jake enjoys spending time with his Pitbull, Eddie, as well as keeping up in the magic world even though he does not publicly perform anymore. Jake is the co-creator and co-host of “The Anti Gaming Gaming Show” an interactive and audience-controlled livestream game show that first debuted in 2020, and is now about to start its third season. Jake is also a lover of EDM music, drumming, smart home tech and not spending winters with multiple feet of snow like he did in his home state of Wisconsin.
Sessions